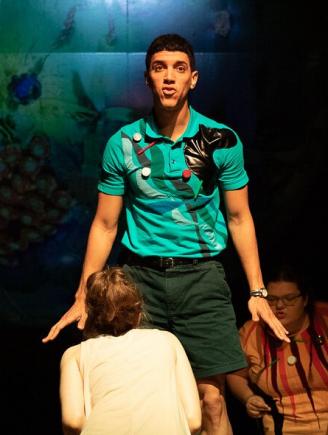 What are you involved with here at ISU and beyond?

During my time at Iowa State, I've been involved with the ISU Men's Basketball Team as a Student Manager and the Puerto Rican Student Association as an Event Coordinator and currently serving my second year as President of PRSA. In ISU Theatre, I've been a part of several productions such as Climate Change Theatre Action: Lighting the Way! (Ensemble), Perform the Protest (Stage Crew), and Of the Deep: Meditations on the Death of a Blue Whale (Puppeteer). In addition, I am currently a Peer Mentor as well as a Student Engagement Ambassador for the theatre department.

What are you working on right now?

Currently, I am preparing for what the next semester is going to look like for both the Puerto Rican Student Association and my role as one of the Student Engagement Ambassadors. As of right now, I am not currently working on any theatre projects but am taking the time to build myself as a professional and have everything ready for when I graduate.

What are you doing/looking forward to this semester?

I am looking forward to continuing to get involved in ISU Theatre. Working or participating in the Student Showcase and also auditioning for the upcoming shows are priorities on my list. Being my last semester, I want to make the best out of every opportunity I can get.

What is your favorite thing about your experiences at Iowa State?

I have countless memories during my time at ISU. I think of how much I've grown personally and how I've gotten the chance to learn from different cultures on campus. I've met people all over the world, and it's been fascinating to see the diversity in a primarily white institution. Being a part of the ISU Men's Basketball Team and the Puerto Rican Student Association have been two of my most fond experiences outside of ISU Theatre. In ISU Theatre, being a part of the different productions has definitely been a joy. Attending KCACTF has hands down been my favorite experience so far. Having the opportunity of going to South Dakota and having an entire week filled with workshops, shows, interviews, auditions, and more, really excited me and got me intrigued by Performing Arts. A lot of great memories have been created in my almost five years here at ISU. Memories will continue to be created in my last few months and I can't wait to experience my final stretch in college.

Why did you choose the Dept. of Music and Theatre at ISU?

I chose Theatre because I've been passionate about Performing Arts for a few years now and always wanted to explore that avenue because of how creative and immersed I could be in it, and all the areas that I can collaborate in. When I was cast in Climate Change Theatre Action (Fall of 2019), that's when I had the opportunity of getting my feet wet, as they would say, and see what Performing Arts was all about. But it wasn't until this past January, at KCACTF, when I realized that I wanted to pursue it as a career and decided to declare as a major. I want to thank Brad Dell for encouraging me and guiding me through the entire process of declaring my major and for providing the unconditional support and effort to make it happen.

What are you interests beyond music and theatre?

In addition to Performing Arts, I am also a Business major. Management and Leadership have always been an interest of mine and something that I want to pursue as well. Another interest I have in addition to those is sports. I've been playing sports my entire life and I want to continue being involved with it in some way, shape, or form.

What are your plans after graduation?

My plans after graduation are yet to be finalized due to the pandemic and so much uncertainty these times have brought. But I am planning to move into a city here in the states to pursue a career in both acting in theatre and/or film. I will also continue building myself as a leader and businessman as those are two are passions that I want to pursue as well.