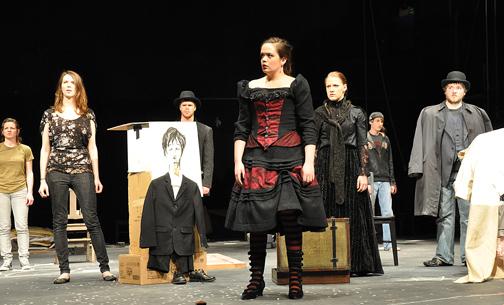 “A character, sir, may always ask a man who he is; he is always ‘somebody’, but a man may very well be ‘nobody’”

An acting company begins to rehearse a play, but as the rehearsal begins, it is interrupted by six people who say they are unfinished characters in search of an author to finish their story.  The Director of the play first thinks the six are mad, but begins to listen to what they have to say, and finally, even though he is not a writer, agrees to stage their story. Others in the acting company are not happy with the Director’s decision.

Single tickets: Adults $15.00, seniors $13.00, students $8.00. Get your ISU Theatre tickets through TicketMaster, the Iowa State Center Ticket Office in Ames, or at the door before the performance. Single tickets are on sale.

Read about it in Inside Iowa State!