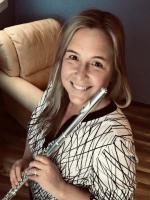 Sonja Giles has appeared as a recitalist, chamber musician, and educator at a variety of venues across the United States, Austria, Belgium, Italy, England, Germany and Russia. She is Second Flute with the Des Moines Symphony Orchestra, flutist for the National Touring Musicals at the Des Moines Civic Center, and performs regularly with Orchestra Iowa. Sonja is exclusively a Miyazawa Performing Artist.

In addition to her performing career, Dr. Giles is equally zealous about her role as an educator. She is Professor of Flute at Iowa State University, where she received the University Award for Early Excellence in Teaching. Sonja is chair of the Winds and Percussion Division, teaches Aural Theory 1 and 2, works with SAI and EdC, and teaches all flute related courses: applied lessons, flute ensemble, flute techniques, and flute literature & pedagogy.