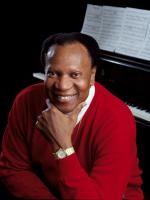 The Voice
Simon Estes, internationally-acclaimed bass baritone, is the star of the stage at the world's major opera houses, a regular guest at international festivals, and has appeared with leading international orchestras under eminent conductors. His recent performance of Simon Boccanegra under the direction of Placido Domingo for the Washington Opera Company at the Kennedy Center is his 100th role.

The Values
Rising from humble beginnings in the small town of Centerville, Iowa, this grandson of a slave sold at auction for $500, son of a father who faithfully provided for his family with menial jobs from coal-mining to serving as a hotel porter, is an amazing success story. With family values founded upon a godly heritage, character-building struggle and sacrifice, Simon Estes successfully faced each new hurdle and career challenge, culminating in triumph for this extraordinarily gifted performing artist. When asked if he thought we were victims of fate or makers of our own destiny, he answered quickly "Makers of our own destiny."

The Vision
Choosing to rise above mere celebrity status, Estes strives to be a positive role model for the next generation. His compassionate humanitarian efforts elevate him to hero status for the numerous youth who benefit from his vision for merit-based education and opportunity. He has been granted numerous honorary degrees including one from Iowa State University.

The Next Generation
Simon Estes makes it possible for young people around the world to pursue their dreams. He has helped talented students attend the Juilliard School of Music in New York City where he has been a professor since 1985. In Oklahoma, he has established the Simon Estes Educational Foundation which has awarded over one million dollars in merit-based college scholarships. The Simon Estes International Foundation for Children in Switzerland was established in 1993 and has saved lives by providing support for child health needs in Switzerland and Bulgaria. During the 1998-99 school year, 40 musically gifted students from the Simon Estes School, serving some of the poorest children in South Africa, attended Des Moines-area high schools under the sponsorship of Rotary District 6000 and performed throughout Iowa as the Simon Estes South African Youth Chorus.