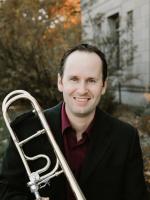 Nathan Dishman is Assistant Professor of Trombone at Iowa State University.  He received a Bachelor of Music in education with a jazz emphasis and was awarded the Master of Music and Doctor of Musical Arts degrees in performance from the University of Missouri-Kansas City Conservatory of Music and Dance where he was an Ovation Scholarship Recipient.  His document, "A Guide to Daily Maintenance for Trombone," is a unique resource that integrates Audacity technology, daily exercises, and information collected from renowned performers and pedagogues. This book is published by Ensemble Publications.  Nathan teaches all things trombone at ISU including private applied lessons, CySlides (trombone choir), Low Brass Methods, and Aural Theory I and II.

He has appeared as soloist at the international level with the Amazonas Philharmonic (Manaus, Brazil), City of Joao Pessoa Wind Ensemble (Brazil), and the State of Paraiba Brass Band (Brazil).  Dr. Dishman’s solo album, Conversations, includes several jazz and classical crossover pieces.  In 2009, Nathan was one of six international tenor trombone participants selected by Joseph Alessi, principal trombone of the New York Philharmonic, to take part in the prestigious Alessi Seminar in Albuquerque, New Mexico.  Nathan was also a participant of this bi-annual event in 2007. ​