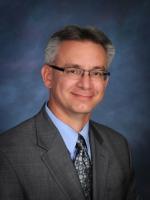 Michael Golemo has been the Director of Bands and University Professor of Music at Iowa State University since 1999. From 2005 to 2017, he also served as the Chair for the Department of Music & Theatre. In addition to conducting the Wind Ensemble and the Symphonic Band, he teaches courses in music education, conducting, and oversees a program of eleven bands.

Under his direction, the Iowa State University Wind Ensemble has performed five times for the Iowa Bandmasters Association conventions. They have performed in Chicago’s Orchestra Hall, Minneapolis’ Orchestra Hall and Omaha’s Holland Center for the Performing Arts. They have had seven performing tours in Europe with performances in Paris, Brussels, Vienna, Prague, Rome, London, Dublin, Edinburgh, Florence, Salzburg, Innsbruck, Munich and Stüttgart. In 2016, the Wind Ensemble performed for the College Band Directors National Association and the National Band Association North Central Division Conference that was held at Iowa State.

A native of Chicago, he received his Bachelor of Music Education and Master of Music degrees from Northwestern University where he studied conducting with John Paynter and saxophone with Frederick Hemke. He completed his doctorate in wind conducting at Michigan State University. He previously served as Assistant Director of Bands at The University of Akron (OH) and prior to that as Director of Bands at Albion College (MI).

Dr. Golemo stays active nationally and internationally as a guest conductor, clinician and adjudicator. He has conducted all-state bands in Iowa, Nebraska, Louisiana, Idaho and New Mexico. He has served as the guest conductor for numerous honor bands at the middle school, high school and collegiate levels. He has contributed articles to a variety of journals and publications including The Instrumentalist, The Journal of the Association of Concert Bands, The Podium, The Journal of the North American Saxophone Alliance, and Teaching Music Through Performance in Band (volumes 9 and 10).