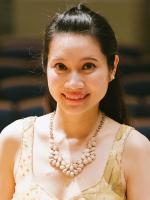 Huang has been a prizewinner in several international piano competitions, including the USASU International Piano Competition in Tempe, Arizona, the 57th Wideman Piano Concerto Competition in Shreveport, Louisiana, and the International Chopin Piano Competition in Taipei, Taiwan. She regularly performs over fifty solo and chamber recitals every year in Europe, States, Canada and Taiwan. She has been invited to summer festivals including the 2006 Aspen Music Festival, the 2007 Pianofest in the East Hamptons, the 2008 Orford Music Festival, Quebec, the 2010 Atlantic Music Festival in Maine, the 2012 CICA Eureka Springs International Music Festival in Arkansas, and the 2012 and 2013 Banff Music Festival, Alberta. Festivals increasingly ask for her presence on their artist rosters. Recently, Huang also was presented in a piano recital in National Taiwan Concert Hall (Taipei), as a result of being nominated for the prize of “Excellent Musician Series” by ProArtist. She also gave a sold-out concert (Chamber Label Management) in 2017 at National Taiwan Concert Hall and TaiChung Opera House.

Huang has travelled with the Ames Quartet to perform at the Colours of Music Festival in Barrie, Ontario and on concert series in Illinois, Virginia, Michigan, Ohio, and Texas. The quartet released compact disc on the Fleur de Son label in 2016, a recording of American quartets. In 2018, the quartet recorded both Faure Piano Quartets on the Fleur de Son label. Recently Huang performed Beethoven's Concerto No. 5 "Emperor" with the Central Iowa Symphony and Iowa State University Orchestra.

Huang is on piano faculty at The Atlantic Music Festival in Maine and guest pianist at Caroga Music Festival in New York during the summer. She was named a Steinway & Sons Artist since 2014. She is also the recipient of 2019 Steinway Top Teacher Award.