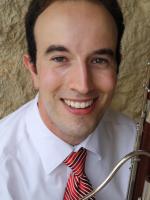 Kevin Judge is a bassoonist committed to bringing a variety of experiences to artistically engaged audiences. Mr. Judge’s work as a performer and teacher has led him to establish an international presence; his orchestral experience has given him the opportunity to perform in Carnegie Hall, Brazil, Belize, and France.

In the summer of 2015, he was selected from a national pool of applicants to serve as a mentor for MusAid, a non-profit organization that provides musical institutions in under-resourced parts of the world with volunteer music teachers and donated instruments and materials. He worked closely with other mentors and the program coordinators to use music as a tool for social transformation, by providing high quality musical education to at-risk children and youth in Belize City, Belize.

During the academic year, Mr. Judge teaches bassoon and serves as an academic adviser for Music Hall at Iowa State University. He is principal bassoon of the Des Moines Symphony and regularly performs with orchestras across the state.

Mr. Judge has attended distinguished classical music summer programs, including Music Academy of the West, Sarasota Music Festival, and the Castleton Music Festival conducted by Lorin Maazel. While attending Music Academy of the West, he was selected to be an Educational Outreach Coach, allowing him to instruct ambitious high school students in a chamber music setting.

A recipient of the Nancy and William Akers Endowed Scholarship, Mr. Judge pursued a Master of Music degree at Rice University under the tutelage of Benjamin Kamins. As a performer at Rice University’s Shepherd School of Music, he was actively involved in the Shepherd School Symphony Orchestra and assorted wind chamber ensembles. Mr. Judge was the Education Outreach Coordinator for the music program at Rice University, which helped elementary students in the Greater Houston Area to better understand classical music in an interactive environment. Prior to pursuing a Master of Music degree, Mr. Judge won first prize in the Iowa Center for the Arts Scholarship in 2008, under the instruction of Benjamin Coelho.