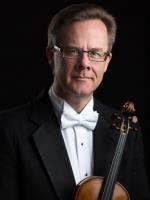 Jonathan Sturm serves many roles in the music world, especially in Iowa.  He is in his 28thseason as concertmaster of the Des Moines Symphony, with which he has performed eight concertos as soloist. Other orchestras in Iowa have also invited him to perform with them featuring repertoire from romantic concertos to Piazzolla’s tangos.  Jonathan’s performances have taken him to Cuba, Russia, Germany, South Africa, and to cities across the United States from Seattle to Palm Beach, Florida. He has been on the faculties of Eastern Music Festival, Madeline Island Chamber Music Festival, and Stringwood Music Camp. In 2011, his 2-CD and DVD project Fire and Romancewon the silver medal for instrumental performance and bronze medal for music video in the Global Music Awards competition.

In addition to his violin performing career, Jonathan is an award-winning professor of music history at Iowa State University and was named by the Iowa String Teachers Association as the Leopold LaFosse outstanding studio violin teacher in Iowa for 2018. His students have graduated to attend some of America’s major universities and conservatories, and have won competitions in Iowa that brought them performances with several orchestras in the state.

Prior to his tenure at Iowa State University, Jonathan taught at Drake University and at Rhode Island College.  He also previously served as the concertmaster of the Des Moines Metro Opera, and the Rhode Island Philharmonic.

Besides his extensive career as a violinist and published music educator, Jonathan performed for 19 years as the violist in the internationally acclaimed Ames Piano Quartet. With this ensemble he recorded ten compact discs released on the Dorian, Albany and Sono Luminus labels.

His diverse interests have also led him to serve two terms as the President of the Iowa State University Faculty Senate, working with the Board of Regents and the university administration to govern the faculty and improve the teaching and research missions of that university. Jonathan holds a Doctor of Music degree from Indiana University, where he studied with famed violinist Josef Gingold, and Master’s degrees in violin and musicology from the Eastman School of Music.  He received his Bachelor’s degree from Oberlin Conservatory.