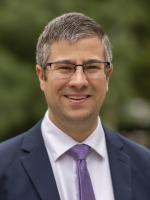 Javan Shields serves as the Assistant Director of Bands at Iowa State University.  He conducts the Concert Band and Campus Band.  He also assists in aspects of the Athletic Band program including the Iowa State University Cyclone Football ‘Varsity’ Marching Band, and Men’s and Women’s Basketball Bands.  He serves as the instructor of State Storm which is the athletic band for soccer and wrestling matches.

Prior to his graduate degree, Mr. Shields served as Assistant Director of Bands at Carrollton High School (OH) and was also the primary middle school choral director.  He created a brass choir ensemble, which received superior ratings at the Ohio Music Education Association Solo and Ensemble Adjudicated Events and his choirs also received superior ratings in adjudicated events.

Mr. Shields earned a Bachelor of Music Education degree from Indiana Wesleyan University in Voice and Trumpet.  As a performer and teacher, he has traveled to Italy and New Zealand to teach music to children of all ages.