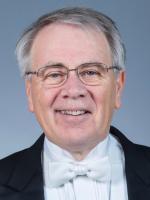 James Rodde is the Louise Moen Hamilton Endowed Chair in Music and Director of Choral Activities at Iowa State University. He conducts the Iowa State Singers, the 140-voice Iowa Statesmen, and teaches choral conducting and literature. Since his appointment at ISU in 2000, the choral program has grown to now include roughly 400 undergraduate choristers.

Choirs under his direction have toured internationally and have been honored with performances at several distinguished music conferences, including the 1993, 1997, 2005, 2009, 2015, and 2019 ACDA National Conferences and the 2008 and 2011 NCCO National Conferences. As a teacher of conducting, his student Shelby Sievers won the ACDA National Undergraduate Conducting Competition in 2005.

Alliance, AMSI, Hal Leonard, Lawson-Gould, Mark Foster, Musica Russica, and Santa Barbara have published Dr. Rodde's editions and arrangements of choral music. He served as the North Central ACDA Repertoire and Standards Chair for Male Choirs for over a decade, and since 2003 has been the Artistic Director of the Des Moines Choral Society.

A native of Minneapolis, Dr. Rodde received the Bachelor's degree in Music Education from Augsburg College and completed the M.A. and D.M.A. degrees in Choral Conducting at the University of Iowa. From 1985 to 2000 he served as Director of Choral Studies at the University of North Dakota, where he was honored with the Fine Arts Faculty Award for Teaching.