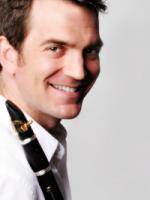 Gregory Oakes is an exciting and energetic clarinetist and a passionate champion of the music of our time. From his Carnegie Hall debut with members of Ensemble Intercontemporain and Pierre Boulez to his performances as a member of the Colorado Symphony Orchestra, Mr. Oakes has been praised by critics for his “outstanding performance” (New York Times) and “jazzy flourishes” (Denver Post). American Record Guide says “Oakes is the rare player who has both excellent classical training and a mastery of the otherworldly procedures demanded by non-traditional repertoire,” and Fanfare Magazine lauds the “formidable technical armamentarium at his command.”

A flexible and versatile musician, Mr. Oakes has performed with notable musicians in prestigious venues around the world. He has been a concerto soloist with the Colorado Symphony Orchestra and the Denver Brass, performed with Grammy® Award-winner Terence Blanchard at the Telluride Jazz Festival, and appeared at the Chicago Arts Club. His recordings have been released on Bridge, Centaur, CRI, Gothic, Karnatic Lab Records, and Naxos and broadcast on National Public Radio. His recent CD, Aesthetic Apparatus: Clarinet Chamber Music of Helmut Lachenmann, appears on the New Focus Recordings label.

As a soloist, Mr. Oakes has performed at multiple International Clarinet Association ClarinetFests, the University of Oklahoma Clarinet Symposium, the New Music Gathering, the International Computer Music Conference, the Crested Butte Chamber Music Festival, Boulder’s Modern Music Festival (M2F), and the Pendulum New Music Series. An international artist, Mr. Oakes has performed frequently in the Netherlands at Amsterdam’s venerable new music hall De IJsbreker, Gaudeamus Music Week, Concerten Tot en Met, the Karnatic Lab concert series, De Badcuyp, STEIM, and Utrecht’s Theatre Kikker. He has been a featured soloist at the prestigious MaerzMusik festival in Berlin. He has also toured Brazil—performing in Brasília, Rio de Janeiro, and Campinas—and conducted masterclasses at notable Brazilian universities UnB, UNIRIO, and UNICAMP. He was in residence as a guest artist at the MUPA Festival of Contemporary Music in Bangsaen, Thailand. In the summer, Mr. Oakes is on the faculty of The Cortona Sessions festival for new music in Tuscany, Italy.

Mr. Oakes has been a member of several orchestras including the Colorado Symphony Orchestra, Mississippi Symphony Orchestra, Colorado Ballet, Central City Opera, and the Colorado Music Festival. He is currently the principal clarinet of the Des Moines Symphony Orchestra. He is also an active chamber musician. As a founding member of the new music and creative arts ensemble Non Sequitur, he has been in residence at Princeton University, Harvard University, Dartmouth College, and the Aspen Music Festival. Oakes has also performed as a member of the woodwind quintet Category 5 and the award-winning clarinet quartet Ensemble Syzygy.

Gregory Oakes is a Buffet Group USA and a Vandoren Performing Artist.