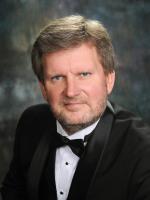 Donald Simonson is Morrill Professor Emeritus of Music and Theatre at Iowa State University where he chaired the Department of Music & Theatre and taught voice, voice pedagogy, vocal literature, and conducts musical theatre. Simonson is a graduate of Northwestern University and undertook advanced study at the Hochschule für Musik und Darstellende Kunst (Academy of Music) in Vienna, Austria. His principal teachers include Marion Hall, Otto Edelmann, Norman Gulbrandsen, and Berton Coffin. He regularly performed leading roles and appeared as a soloist with opera companies, symphony orchestras and chamber ensembles throughout Europe, America, Australia and the Far East, including concert performances with ensembles such as the Warsaw Philharmonic, the Wiener Philharmoniker Solisten, the Austrian National Radio Symphony, and the Clemencic Consort. His performances have been featured on Austrian, German, and Italian national radio and television broadcasts and on NPR. Additional highlights include a recital tour of the Republic of China, where he also performed the title role in Mozart’s “La clemenza di Tito,” a concert tour of Austria and the Czech Republic, and his first concert tour of South Africa with Simon Estes, Mary Creswell and The Ames Quartet. He has recorded for the Musical Heritage, Harmonia Mundi, Musique D'or, and CBS/Sony Classical labels. Earlier, Simonson maintained a research laboratory at ISU specializing in vocal acoustics. The results of his investigations have been presented at national and international conferences and published in leading journals.

Simonson's students have gone on to win Fulbright Scholarships and Rotary Fellowships to Germany, Sweden and Italy and have been finalists and winners of competitions such as the Union League, MacAllister, NATS, and MET auditions. His students may be heard in roles with opera companies both here and abroad, including the Metropolitan Opera, Chicago Lyric, Houston Grand, Los Angeles, Barcelona, and Leipzig to name a few. His students may also be heard on Broadway, and in national touring productions of musical theatre. Numerous former students hold faculty positions in colleges and universities throughout the U.S. In 2006 Simonson was named a Master Teacher for the NATS Summer Intern Program at the University of Missouri-Kansas City Conservatory. He reprised his role as a Master Teacher in 2012 at Colorado State University in Fort Collins, and in 2015 at the University of Nevada-Las Vegas.

From 2010-2012 Simonson served a two-year term as President of the National Association of Teachers of Singing (NATS). An active member of NATS for over 35 years, Simonson served the organization in a variety of capacities. He served two terms as the Iowa District Governor, and two terms as Governor of the Central Region and member of the National Board of Directors. In 1998 Simonson conceived and coordinated the first ever “Call for Papers” for a NATS National Conference. In 2006 he was elected the Vice President for NATSAA. He also served as a reviewer for the “Call for Papers” for the International Congress of Voice Teachers (ICVT8) held in Brisbane, Australia in August 2013. In 2014 he coordinated the second NATS National Music Theatre Competition (NMTC) in Boston. More recently, Simonson was elected to the prestigious American Academy of Teachers of Singing, a select group of not more than 40 voice teachers from around the country, centered in the New York area.