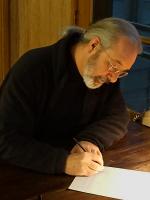 Hopkins holds a Doctor of Musical Arts degree from Cornell University, where his principal mentors were Karel Husa (composition) and John Hsu (performance), and a Master of Music degree from the Cleveland Institute of Music, where he studied with Donald Erb and Eugene O'Brien. His undergraduate degree is from the University of Nebraska, during which time he was a cellist with the Lincoln Symphony Orchestra and Nebraska Chamber Orchestra. He is a recipient of an Aaron Copland Residency Award, and has been artist in residence with fellowships from the Albers Foundation, Dorland Mountain Arts Colony, Hambidge Center for Creative Arts and Sciences, Kimmel Harding Nelson Center for the Arts, and MacDowell.

His compositions have been performed at major music festivals in Athens, Basel, Grenoble, Hong Kong, Honolulu, Melbourne, New York City, Tanglewood, Toronto, Washington DC (Library of Congress, Smithsonian), Vienna, and Zürich, in many national and international conferences devoted to experimental contemporary music, and from concert stages in England, Holland, and Switzerland. Media broadcasts including his work have been heard over the Australian Broadcasting Corporation, Canadian Broadcasting Corporation, Östereichischer Rundfunk, Radio Canada, WNYC, and Public Radio International. Recordings of his compositions are available from Innova and Music from SEAMUS.

For Iowa State, Dr. Hopkins has been Director of the Center for Excellence in the Arts and Humanities, and developed a Minor in Music Technology, an Integrated Electronic Arts Cluster for Interdisciplinary Graduate Studies, and new courses in composition and creative computation in music. He was for several years on the faculty of the graduate program in Human-Computer Interaction. He frequently offers courses in the Honors Program and Frontiers of the Discipline courses for the College of Liberal Arts and Sciences. He is curator for the Lipa Festival of Contemporary Music and hosted the 2007 national conference of the Society for Electroacoustic Music in the United States, subsequently serving for six years on the board of directors as Director of Conferences. Prior to joining the faculty of Iowa State University in 2004, Dr. Hopkins taught at the University of Illinois, the University of Minnesota, and Syracuse University, offering courses in composition, ​​​​​​ electroacoustic music, form and style analysis, and interdisciplinary courses in digital arts media.