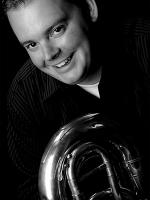 Christian Carichner serves as the Associate Director of Bands and Director of the Cyclone Marching Band at Iowa State University. He oversees all aspects of the Athletic Band program including the 350-member Iowa State University Cyclone Football ‘Varsity’ Marching Band, Men’s and Women’s Basketball bands, Volleyball Band, Wrestling Band and State Storm. In addition to his athletic band duties, Christian also conducts the Symphonic Band, teaches the Marching Band Methods course and instructs the applied Tuba and Euphonium studios.  Previously, Christian served as Assistant Director of Bands at ISU in addition to instruction the low brass studios, teaching low brass methods, and directing both the Concert and Campus bands.

While serving as director of the Cyclone Marching Band, the band was awarded the prestigious Sudler Trophy - the highest honor bestowed upon a collegiate marching band in the United States.

Christian attended Ithaca College where he earned degrees in music education and performance while studying tuba with Dave Unland and brass pedagogy with Alex Shuhan, as well as conducting studies with Stephen Peterson, Jeffery Grogan and Janet Galvan.  After Ithaca, Christian earned a Master of Music degree in Tuba Performance from Arizona State University where he studied with acclaimed Tubist and pedagogue Sam Pilafian. Christian also studied tuba with Patrick Sheridan, Charles Villarrubia and Matt Good.  At both institutions, Christian performed at the American Bandmasters Association annual conventions in 2004 and 2007.

Christian has performed or taught in 47 states and 12 different countries across the globe. Recently, he was a featured clinician at The Midwest Clinic, the CBDNA Athletic Band Symposium and a performer/clinician at the International Tuba Euphonium Conference.

Christian has also performed with the Arizona Musicfest Orchestra, the Tampa Tradewinds, the Orchestra of the Southern Finger Lakes, Pinnacle Brass, Rhythm and Brass, Proteus 7, Salt River Brass and has performed with the national tour of the hit Broadway musical Chicago.

Christian has served as Brass Caption Head for the Phantom Regiment and The Academy Drum and Bugle Corps, as well as a lead brass instructor for the Aimachi Marching Band from Nagoya, Japan.   Currently, he is in demand as a guest clinician, judge and show designer/arranger.

Christian is a member of CBDNA, Pi Kappa Lambda, Phi Kappa Phi and the International Tuba Euphonium Association.  He is an honorary member of both Kappa Kappa Psi and Tau Beta Sigma. Christian is also the first marching brass artist for Pearl/Adams where he consults on the design of their marching brass instruments and is also an Adams Custom Brass artist.