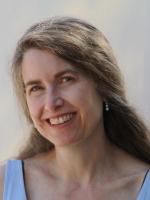 Dr. Charissa Menefee is a playwright, poet, director, and performer.  She has been a Tennessee Williams Scholar in Playwriting at the Sewanee Writers’ Conference and a finalist for the Julie Harris Playwright Award. Her plays have been honored by the Utah Shakespeare Festival's New American Playwrights Project, Pandora Festival of New Plays, American College Theatre Festival, Arizona Theatre Conference, Christian H. Moe Awards, and City of Charleston Literary Arts Awards.  PRETTY LUCKY is included in 105 FIVE-MINUTE PLAYS FOR STUDY AND PERFORMANCE (Smith & Kraus).  Recent productions include OUR ANTIGONE, adapted from Sophocles, premiered at Story Theatre Company (Iowa); YOUR SOUP, SIR, part of Paula Vogel's UBU ROI Bake-Off at the Playwrights Center (Minnesota); SARAH'S POEM, premiered in Rover Dramawerks' 365 Women a Year Festival (Texas); CHECK YOUR TICKET, included in the What She Said Festival at The Underground Theatre (Minnesota); and LYDIA’S PLAN, named Best Play in the Theatre Lawrence Short Play Festival (Kansas).  HOW LONG IS FIFTEEN MINUTES? was supported by a research grant from Iowa State University's Center for Excellence in the Arts & Humanities and recently featured in Tennessee Women's Theatre Project's Women's Work Festival; the anchoring monologue is in production as a short film, directed by the author.

Dr. Menefee has been involved with two hundred plays, give or take, as writer, director, producer, dramaturg, actor, designer, and technician.  Favorite directing projects include OEDIPUS THE KING, A LIE OF THE MIND, THE SKIN OF OUR TEETH, and TOWARDS ZERO, as well as children’s theatre productions of ANDROCLES AND THE LION, THE PHANTOM TOLLBOOTH, THE GREAT ALPHABET ADVENTURE, and EARTHLINGS!  Her work as an actor includes musicals, improvisational comedy, and roles in AGNES OF GOD, TO GILLIAN ON HER 37TH BIRTHDAY, BELLS ARE RINGING, THE SOUND OF MUSIC, THE GUYS, THE IMPORTANCE OF BEING EARNEST, and THE ELEPHANT MAN.  Dedicated to the development of new plays and playwrights, she regularly serves as artistic director and producer for The One Day Plays, and she was co-founder and co-producer, with playwright Micki Shelton, of Tomorrow’s Theatre Tonight, a new play reading and development series that ran for nearly a decade in Arizona.  During the past year, she has co-produced, with director Vivian M. Cook, three theatre actions on campus, including Iowa State’s contribution to the international Climate Change Theatre Action.

Her chapbook, WHEN I STOPPED COUNTING, is available from Finishing Line Press, and her poetry can also be found or is forthcoming in ADANNA, POETRY SOUTH, TERRENE, POETS READING THE NEWS, THE PADDOCK REVIEW, TWYCKENHAM NOTES, AMYGDALA, THE INDIAN RIVER REVIEW, FOOTNOTES, DRAGON POET REVIEW, Telepoem Booths, and collections such as THE HIPPOCRATES PRIZE FOR POETRY & MEDICINE ANTHOLOGY, SURPRISED BY JOY, and THE POEMING PIGEON: IN THE NEWS.  Her collection, I AM TRYING TO REMEMBER WHEN YOU REMEMBERED ME, was in the finals for the 42 Miles Press Poetry Award and the semi-finals for The Washington Prize, and her poem, “Get the Story,” was a finalist for the Charter Oak Historical Award.  Dr. Menefee is on the faculties of the MFA Program in Creative Writing & Environment and the MA Program in Literature, and she is a 2018 Writer-in-Residence at the Fairhope Center for the Writing Arts.