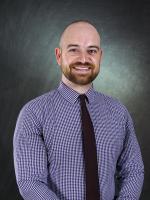 Cason is an Assistant Professor of Theatre at Iowa State University where he teaches classes in acting, musical theatre, and introduction to performing arts. He holds his M.F.A. in Theatre Directing from Baylor University and his B.A. in Theatre Arts from UCLA.

He is the author of The World at Play: Performance from the Audience’s Perspective, published by Kendall Hunt Publishing Company. As a scholar, he has presented his scholarship at national and international conferences, and published in prestigious journals including Theatre Topics, Theatre Journal, Shakespeare Bulletin, Theatre/Practice, and the Journal of Film and Video. Cason is currently serving as the Senior Co-Chair for the Practice/Production Symposium of Mid-America Theatre Conference.

Professionally, Cason has created theatre as an actor, director, producer, and occasional sound designer across the nation—most notably working off-Broadway in New York City as an actor in the original cast of Bukowsical (New York Fringe Festival) and original cast of The Brain from Planet X (NYMF). Cason also serves as the co-Founder and co-Artistic Director of The@trics Theatre, a nomadic theatre troupe focused on developing work by underrepresented playwrights, theatre for social change, and community development through live theatre. However, his favorite roles to play are being husband to Tiffany Antone, playwright and Lecturer of Acting at ISU, and being human-dad to Finnegan and Daschle and cat-dad to Carrot, Mogwai, Lewis, and Mobius.