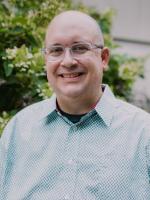 Brad Dell (he/him/his) is Chair of the Department of Music and Theatre and an Associate Professor at ISU, where he teaches classes in directing and performing arts. He is the National Co-Vice-Chair of the Kennedy Center American College Theatre Festival (KCACTF) and the immediate past Chair of KCACTF Region 5. He is the recipient of the Broadway World Des Moines Art Educator of the Decade Award, the 2019 Kennedy Center Gold Medallion, the 2017 Outstanding Teaching Award from the ISU College of Liberal Arts and Sciences, the 2017 Faculty and Staff Inspiration Award from the ISU Alumni Association, the 2017 Catch Des Moines Champion Award from the Des Moines Convention and Visitor's Bureau, and the 2012 “Local Treasure” award from the Ames, IA Community Arts Council. Brad is also the former Artistic Director of Apple Hill Playhouse in Delmont, PA, Repertory Theater of Iowa, and Iowa Stage Theater Company. He has directly nearly 100 plays and musicals at theatres and universities around the country. Some of his recent directing highlights include Godspell, Macbeth, Orpheus in the Underworld, Oklahoma!, The Children's Hour, Romeo and Juliet, Company, Little Women, Cabaret, The Secret Garden, Les Miserables, Next to Normal, Fiddler on the Roof, and Rent. Brad holds a Bachelor of Arts in Theatre from Westminster College in New Wilmington, Pennsylvania, and a Master of Fine Arts in Directing from Western Illinois University.