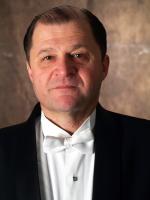 A recipient of the prestigious Yehudi Menuhin Award, violinist Borivoj Martinic-Jercic has enjoyed an illustrious career. Born in Zagreb, Croatia, he graduated from the Blagoje Bersa Conservatory of Music in 1978, where he studied with Kristijan Petrović.

Mr. Martinic-Jercic received his Bachelor and Master of Music degrees from the University of Michigan, under the guidance of Professors Paul Makanowitzky and Ruggiero Ricci. His numerous solo and chamber music performances have taken him throughout the United States, Canada, Asia and Europe. In addition to appearances with the Orpheus Chamber Orchestra and the Detroit Contemporary Chamber Ensemble, "Boro" served as Concertmaster of the Phoenix Symphony for fifteen years and the Concertmaster of the Santa Fe Opera Orchestra since 1995.

"Boro" is an Associate Professor of Violin at Iowa State University and the violinist of the Ames Piano Quartet.