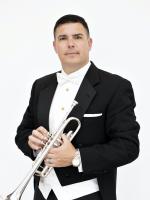 Andrew was born and raised in Lindsborg, KS, known as “Little Sweden U.S.A.” He cultivated his musical endeavors under Lindsborg’s extraordinary support of the fine arts and strong musical traditions. During his youth, he performed in the Bethany Oratorio Society’s production of Handel’s Messiah and studied trumpet with Roger Thorstenberg. He studied trumpet performance at Wichita State University, where his primary instructors were Les Linn, Bob Grim and John Hagstrom. He also holds a Masters degree in trumpet performance from the University of Missouri.

During his academic studies, Andrew was a winner of the Wichita State University Concerto/Aria Competition and performed the Tartini Concerto in D with the WSU Symphony. He won the 2004 University of Missouri Concerto Competition and performed the J.F. Fasch Concerto in D for Trumpet, 2 Oboes, Strings and Continuo with the University Philharmonic. He was a recipient of the MU Emerging Artist Award, and appeared as a featured soloist with the University of Missouri Trumpet Ensemble at the 2004 International Trumpet Guild convention in Denver, CO, performing the Concerto in E-flat by G.H. Stölzel.

In 2010, Andrew won the Principal Trumpet chair with the Fort Collins Symphony, performing to acclaim Bach’s Brandenburg Concerto No. 2 on his first Masterworks Concert. He was granted full tenure after his first full season in 2011, and went on to appear with FCS as a featured Guest Artist performing Haydn’s Trumpet Concerto in E-flat.

While in Colorado, Andrew was also Principal Trumpet with the Colorado Bach Ensemble, Opera Fort Collins and Canyon Concert Ballet. He has also appeared regularly with the Colorado Symphony Orchestra, Colorado Ballet Orchestra, Colorado Music Festival Orchestra, Boulder Philharmonic, Greeley Philharmonic, Pro Musica Colorado and Cheyenne Symphony. As a chamber player, Andrew is Co-Principal Trumpet with the Apollo Chamber Brass, as well as a member of the Boulder Brass. He has also appeared with the Denver Brass, Epic Brass Quintet, Wichita Brass Quintet and the University of Missouri Faculty Brass Quintet. He has been a trumpet lecturer at the University of Northern Colorado and is also in demand as a featured soloist and clinician.

Andrew enjoys spending free time arranging music for trumpet, brass quintet and large brass ensemble. He is a three-time World Champion (self-given title) Cribbage player. He also has an affinity for the game of baseball, and faithfully carries on the Bishop family tradition of being loyal St. Louis Cardinals fans.

In the spring of 2019, Andrew won the Principal Trumpet chair with the Des Moines Symphony and, since relocating to Kansas City, he has also performed with the Kansas City Symphony and Wichita Symphony Orchestra. He lives in Olathe, KS with his wife Jillian, and their Puggles, Bella and Matai.