Organist Joby Bell is known for “the breadth of his repertoire, technical virtuosity, and for the personal warmth which shines through in his performances.” His acclaimed blog at <www.JobyBell.org> deals with a comprehensive range of organ-related topics including teaching philosophies, recital preparation, church music, and professional concerns.

Since 2004, he has served on the faculty of the Hayes School of Music, Appalachian State University, where he teaches organ and church music studies. His teaching specializes in practice techniques, memorization, service playing, choral accompanying, and maintaining grace under pressure – lessons always best taught by example.

He has made a number of recordings on the Centaur label. American Classic Widor is a seven-volume series of the complete solo organ works of Charles-Marie Widor, recorded on Aeolian-Skinner and E.M. Skinner instruments around the country. American Classic English is an all-British program recorded on the landmark Aeolian-Skinner at First Baptist Church, Longview, Texas. Sonatas and Variations features large works by Jongen, Brahms, and Reubke, recorded on the Fritts organ at St. Philip Presbyterian, Houston. Music City Mixture is a self-produced project recorded on six mechanical-action organs of Nashville. Live Performances is a self-produced promotional compilation from performances at Appalachian State University, Rice University, Houston Baptist University, and the Washington National Cathedral. Joby is also featured on let the rain kiss you, a collaborative project with acclaimed soprano Melissa Givens. Currently, he is preparing to record the complete organ works of Jeffrey Nytch.

Born in 1968 in Statesville, N.C., Joby Bell attended high school at the [University of] North Carolina School of the Arts, where he studied piano with Marian Hahn and Robert McDonald. He earned the Bachelor of Music degree in organ and piano from Appalachian State University and the Master of Music and Doctor of Musical Arts degrees in organ from Rice University. His teachers include H. Max Smith and Clyde Holloway, organ, and Rodney Reynerson and Allen Kindt, piano. He has served church posts in Houston and throughout North Carolina.

Joby lives on the east coast, but his home away from home is Iowa. He spends summers and Christmas break based in Waukee and has very much enjoyed making new friends in the music world in this area. The Central Iowa Chapter of the American Guild of Organists is his primary chapter, while he is a dual member of four additional, secondary chapters closer to home. He is honored to have been invited to play this recital today as an “Organist of Iowa.” 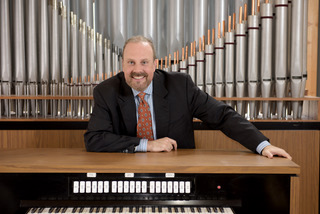