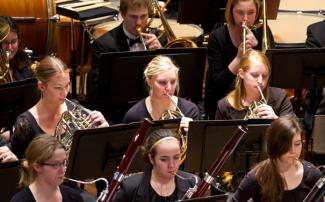 The tradition of concert bands at Iowa State University goes back over 100 years!

Currently, there are four concert bands - the Wind Ensemble, the Symphonic Band, the Concert Band, and the Campus Band. All students are eligible to participate in any of these ensembles.

For Wind Ensemble and Symphonic Band audition information for Fall 2020, please contact Dr. Michael Golemo, Director of Bands, at mgolemo@iastate.edu. Auditions are being submitted onlione this semester and must be completed by August 12. 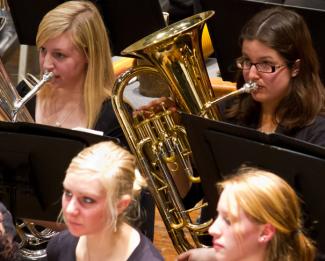 The concert bands perform on campus in both the intimate 309-seat Martha-Ellen Tye Recital Hall in the Music Hall and the 2,600-seat Stephens Auditorium, recognized as one of the finest performance halls in the world. The concert bands also perform at Ames City Auditorium, located at 515 Clark Ave.

On campus, the Wind Ensemble presents approximately six concerts each year, performing in Martha-Ellen Tye Recital Hall and C. Y. Stephens Auditorium, one of the finest performance halls in the world.

Their most recent tour in May, 2015 included stops in Rome, Florence, Venice, Salzburg and Rothenburg.

The Wind Ensemble performed for the 2016 College Band Directors National Association North Central Division convention which was held at Iowa State. Under the direction of Michael Golemo, they have performed four times at the Iowa Bandmasters Association convention, most recently in 2014.

The Wind Ensemble is conducted by Michael Golemo, Director of Bands.

Photos from the ISU Wind Ensemble trip to Rome, Florence, Vencie, Salzburg, and Rothenburg in May 2015.

The Symphonic Band is an 80-member ensemble that explores traditional as well as contemporary works by composers such as Percy Grainger, Malcolm Arnold, Gustav Holst, Ralph Vaughan Williams, and Leonard Bernstein.

The Concert Band is conducted by Javan Shields, Assistant Director of Bands.