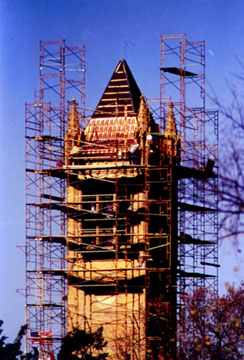 In the late 1980's, a renovation feasibility study cited the necessity of addressing major maintenance issues for the 90-year-old campanile. These are the events that led to a successful renovation drive:

Fall 1991. Budget cuts hit ISU and the Department of Music was not able to replace the carillon position following the retirement of Professor Richard von Grabow.

September 19, 1991. Kenn McCloud, operations manager and morning disk jockey from KCCQ-FM in Ames, locked himself in the campanile, declaring his intent to stay until $10,000 was raised - enough to pay a guest carillonneur to play the bells again.

September 19-24, 1991. Ames area residents, students, faculty, staff, even alumni passing through central Iowa, descended on the campanile to add their contributions to the "Bucks for Bells" campaign.

September 24, 1991. Ames business leaders added their support and Kenn McCloud emerged from his self-imposed sentence after raising $10,700 in five days.

September 25, 1991. Statewide news agencies carried the story of the silent bells and the disk jockey who resided in the campanile playing "Louie Louie." The story prompted two Davenport alumni, Jean and Michael Steffenson, to step forward with a leadership gift for the campanile renovation.

November 18, 1991. ISU alumnus Thomas Sutherland (MS '60) was released after more than six years in captivity in Lebanon. In one of his first press conferences after being released, Sutherland mentioned the bells of Iowa State. His comments reached the pages of The New York Times and other national papers.

"I was very, very moved when I heard on 'Voice of America' a recording of the bells of Iowa State, which I particularly appreciated hearing when I was a student there on campus," Sutherland said. "So when I heard them ring out 72 bells on the occasion of my seventy-second month (in captivity), I was extremely happy. So to Iowa State, I would say, 'Keep the bells ringing.'"

December 5, 1991. An ISU alumnus read Sutherland's comments in The New York Times and called the ISU Foundation, asking what it would take to complete the full renovation of the campanile. The $350,000 renovation cost stood $175,000 short of its goal, so this particular alumnus - who asked to remain anonymous - pledged half of the remainder with a challenge for alumni and friends to complete the goal.

December 30, 1991. An anonymous donor wrote to President Jischke to express a hope that ISU's campanile would never again reach a point of serious physical deterioration. To assure funding for the campanile's future upkeep, the donor contributed $1 million to permanently endow the campanile.

January 2 through April 30, 1992. Over 2,700 alumni and friends responded to the challenge to renovate Iowa State's most visible landmark.

May 1, 1992, VEISHEA. With more than $350,000 raised for the campanile, a celebratory renovation "kick-off" was held. Jean and Thomas Sutherland highlighted the celebration by speaking to the campus community and ringing a replica of the carillon bells. 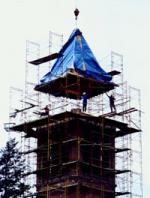 The renovation of the tower (campanile) by Rietz Engineering involved:

restoring the brick and terra cotta exterior facades, entry foyer, and bell chamber
replacing and structurally reinforcing the terra cotta pinnacles and copper clad roof
structural repair to the bell chamber arches
adding new clock movements and a digital control system to coordinate the operation of the clock and chimes

The renovation of the instrument (carillon) by the I.T. Verdin Company included:

a redesign of the framing on which the bells are hung
repositioning of the bells
creating new clappers for all bells
a new transmission system for the instrument
the installation of a new playing console
the installation of a practice console, housed in room 47 of Music Hall, where students receive carillon instruction and practice