Events are FREE and OPEN to the public.
** Lunch is available for purchase through reservations ONLY. 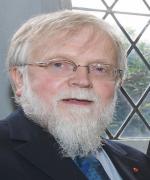 Of Flemish-Irish parents, Adrian Patrick Gebruers holds the unique distinction of being the first Irish-born carillonneur in the long history of the instrument.

A graduate of the National University of Ireland, he received his initial carillon tuition from his late father (Staf Gebruers) and subsequently studied under Jef Rottiers and Piet van den Broek at the Carillon School in Mechelen (Flanders).

In 2009 he celebrates his thirty-ninth anniversary as Carillonneur of St Colman's Cathedral in Cobh, a picturesque harbour town on Ireland's southern coast.   A major restoration and modernisation of this magnificent instrument was completed in 1998, and it is now the largest carillon in Britain and Ireland.    A frequent guest recitalist abroad, Adrian Gebruers has been the recipient of several Travel Awards and a research grant from the Irish Arts Council and Department of Foreign Affairs, as well as a Tyrone Guthrie Bursary and commissions from the Contemporary Music Centre Ireland and Alfred University (New York).

A former Assistant Principal of Colaiste Muire in Cobh, he is lecturer in carillon studies at the Music Department of University College Cork.   A founding Vice-President of Eurocarillon, he was Honorary President of the British Carillon Society from 1997 to 2000 and again from 2001 to 2006.   In 1998 he took on the highest executive position in the carillon world on being elected President of the World Carillon Federation and in 2002 was unanimously re-elected for a further four-year term.

In 2005 he received from Pope John Paul II the very special honour of being made a Papal Knight of the Order of St Gregory the Great (KSG) for services to the Church.

Chevalier Adrian Gebruers is married to physiologist Dr. Elizabeth Gebruers and they have two sons, two daughters and seven grandchildren.