Bring your friends and family, enjoy a scoop of ice-cream,
visit the campanile, watch carillonneurs in action, and listen to
the Bells of Iowa State ring out your favorite American tunes.

Guest carillonneur for the festival is Beverly Buchanan from Belmont University, Tennessee.
She will give a seminar and perform the music of Percival Price, one of the first American Carillonneur and Campanologist.
In addition, various ISU music groups will be featured in the family concert.

All events are FREE.

The festival includes a carillon composition competition for young composers.
For information, call (515) 294-3831 or e-mail tstam@iastate.edu 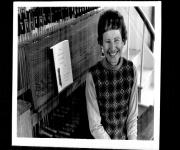 BEVERLY BUCHANAN, currently University Carillonneur at Belmont University, Nashville, Tennessee, has served three carillons: resident carillonneur for the Carillon Beach Institute, Panama City Beach, Florida 1996-1999, University Carillonneur for Belmont University, Nashville, Tennessee 1988-1996 and 1999-present, and carillonneur at Christ Church Cranbrook, Bloomfield Hills, Michigan, from 1964-1988. She received music degrees from the University of Michigan and studied carillon there with Percival Price. An active member of The Guild of Carillonneurs in North America, Mrs. Buchanan has served as a Director and as Chairman of the Committee on Student Examinations in addition to being chairman and publisher of carillon music publications for 25 years. In 1988 the University of California, Berkeley, awarded her the Berkeley Medal for Distinguished Service to the Carillon, and in 1994 The Guild of Carillonneurs awarded her the Certificate of Extraordinary Service. She has compiled and edited several collections of carillon music, including The Belmont Book for Two Octave Carillon series and The Cranbrook Hymn Collection series. She is curently compiling and preparing an anthology of compositions and arrangements for carillon by Percival Price. She has concertized on major carillons in North America and Australia and has participated in International Carillon Festivals. 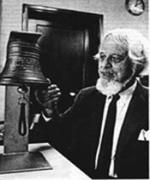 Bells and Man is the title of a book written by Percival Price who has been referred to as the founder of the carillon profession in North America. PERCIVAL PRICE, (1901-1985), the first professional carillonneur in North America, was the first North American to graduate from the Carillon School in Mechelen, Belgium. He was a charter member and founding member of The Guild of Carillonneurs in North America. Carillon positions included Metropolitan Church, Toronto; Park Avenue Baptist Church (now Riverside church), New York City; Dominion Carillonneur at Ottawa, Canada. From 1939 until his retirement in 1970, he was Carillonneur and Professor of Campanology at the University of Michigan. Many of today's carillonneurs trained there under him. In honor of his centenary next year, Beverly Buchanan and other former Price students are preparing an anthology of his music with a biographical introduction by his daughter Daphne Price McCree. Price's contributions to carillon music number close to 1,000 selections, mostly previously unpublished. He was equally comfortable composing and arranging for carillons of all sizes, from 2 octaves to four and a half octaves and larger.