This concert presents dance formats from different cultures, with a varying degree of danceability.

Alexander Griboyedov was a Russian diplomat, playwright and composer. During a mission in Teheran he was killed during a popular uprising. In sharp contrast to his violent end are his Two Waltzes for Piano. In these to elegant, almost naive dances in rondo form, he shows himself not only as a contemporary, but also a kindred spirit to Franz Schubert.

Carl Maria von Weber wrote his famous Introduction to the Dance in 1819, a few months after his marriage. It is a programmatic piece that, in the slow introduction, depicts a man, inviting a lady to dance; after some hesitation, she consents and both loose themselves in a series of waltzes, some elegant, some brilliant. At the end, both partners say each other an elegant farewell.

Béla Bartók's music is rarely played on the carillon, perhaps because of its harsh dissonants that don't fit the sound properties of bells. Nevertheless, some of his works render an excellent effect on bells. The six Romanian Folk Dances are among his most popular works: they offer a mix of joy and melancholy, and excel in melodious qualities and rhythmic exuberance.

Villa-Lobos' well-known Mazurka-chôro from 1908 is a part of his Suíte Popular Brasileira for Guitar, although it is not sure whether the composer wanted the elegant dance to become part of a suite. 'Choro' refers to a 19th century music style which originated in Rio de Janeiro and which influenced folk as well as classical composers. Although the term signifies 'cry', much choro music has a cheerful character. Like most choro music, this Mazurka-chôro is written in rondo-form. This Mazurka has some features of a slow waltz, and is far from the traditional Polish mazurka, which has an accent on the second beat.

Camille Saint-Saëns' Dance Macabre from 1874 is a musical illustration of a poem by French poet Henri Cazalis. The piece depicts Death, who wakes up the dead at midnight, inviting them to dance on the sound of his violin. Turned up by thunder and wind, the dance comes to a climax. After the rooster's call, the dead return to their graves and lonesome Death repeats the dance motive one last time, as a reminder to a wild night on the churchyard. Saint-Saëns' use of the xylophone, imitating rattling bones, is very well echoed in the sound of the carillon bells.

Three years before his death, Francis Poulenc wrote a moving Sarabande, his only work for guitar. The piece is as melancholic as a sarabande should be and is reminiscent of Dowland's Elegiac Pieces for Lute. The modal cadenzas, which give the piece an antique flavor, work remarkably well on the carillon. The roots of the sarabande as a slow dance have disappeared, given the fact that Poulenc interrupts the traditional 3/4 beat of the dance by measures in 4/4 and 5/4 beat.

Ronald Barnes was one of the godfathers of American carillon culture, writing carillon music that has become part of the international canon of the carillon repertoire. Despite his promotional efforts for a genuine American carillon art, much of his original works are rooted in the European classical and folk tradition. In the work, he succeeds remarkably well in transforming the typical features of the Spanish flamenco guitar style into convincing bell music. The listener will notice the beats and ornaments of the guitar and the passion of the flamenco dancer, descending from the bell tower. 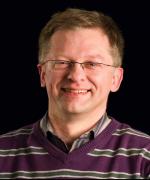 Luc Rombouts is city carillonneur of Tienen and university carillonneur of Leuven (Belgium). He has given recitals in Europe and in the USA and has performed during festivals and congresses. Together with his colleague Twan Bearda he forms the carillon duet The Bells' Angels. His research on historical aspects of carillon culture resulted in facsimile editions of two collections of 18th century carillon music and in the award-winning carillon history book Zingend Brons. This book was published in an English edition under the title Singing Bronze. In 2016, Luc obtained a Ph.D. degree cum laude at Utrecht University on a study about the origin of the carillon.