The Bells of Iowa State: an enduring tradition 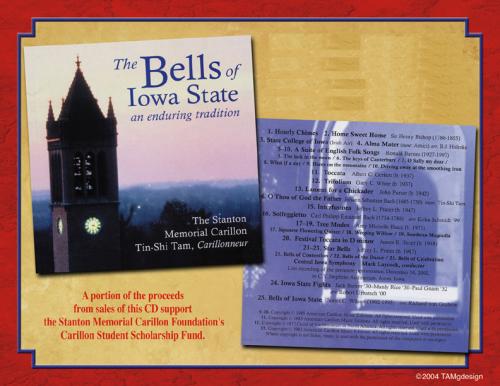 Notes on the Music

The selections on this recording represent various eras of the Bells of Iowa State. The program begins with the chime tune Westminster Quarters, which is used as the Hourly Chimes. The first tune ever rung on the original ten-bell chime in 1899 was Home Sweet Home. It is played here on those same ten bells.
State College of Iowa and Alma Mater were two Iowa State songs included in a record album released in honor of the 50th anniversary of the installation of the first chime. The settings on this CD recording were reconstructed and newly transcribed, using only the 36 bells that comprised the Stanton Memorial Carillon in 1949.
Toccata (1978), Suite of English Folk Songs (1985), and Star Bells (2002) are original carillon works commissioned by the Stanton Memorial Carillon Foundation. The Foundation also sponsors the ISU Carillon Composition Competition to encourage young composers to create carillon works. Tree Modes was the first winning composition.
The Stanton Carillon has often been the muse for music faculty, students and friends of Iowa State who are inspired to compose and arrange music for this instrument. Several compositions are included in this album including the Cyclone favorite Iowa State Fights and the beloved Bells of Iowa State.

13. John Purser: Lament for a Chickadee

Johann Sebastian Bach: O Thou of God the Father

Bells of the Dance