It was 400 years ago October 16 that the most important Dutch composer from his time, Jan Pieterszoon Sweelinck, died. He was organist at the Old Church in Amsterdam. As organ teacher he was very important. Many organists, especially from Germany, came to him for organ and composition lessons. Ballo del Granduca (the Grand Duke’s Ball) is a majestic theme with variations.

Very different are the Variations on Je suis Lindor by Wolfgang Amadeus Mozart. He liked to improvise on themes and then write them out.

The carillon compositions of Henk Badings can be seen as the core of the Dutch original carillon music. The Praeludium (prelude) starts very impressionistic, like Claude Debussy.

The Rhapsody in Blue was first performed in 1924. The clarinetist Ross Gorman played a glissando during the first measure. George Gershwin liked it so much that he wrote the glissando in the score. 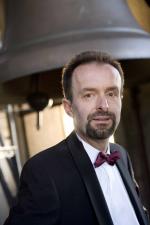 Roy Kroezen was born in Enschede, The Netherlands in 1967 and was appointed carillonneur of the Centralia Carillon in 2016. He is organist at St. Mary Catholic Church and Trinity Lutheran Church in Centralia and the Fox Theater in St. Louis. He studied organ at the ArtEZ University of the Arts in Arnhem, with Cor van Wageningen and Theo Jellema. He studied carillon at the Netherlands Carillon School in Amersfoort with Bernard Winsemius and Henk Verhoef, and also at the Royal Carillon School Jef Denijn in Belgium with Geert D'hollander and the Lemmens Institute in Leuven Belgium with Carl van Eyndhoven. He holds a master degree in carillon, and organ and choir conducting degrees. In the Netherlands he served as a municipal carillonneur in Zwolle, Hoogeveen, Arnhem and Huissen. He was 22 years organist in Hilversum at the Apostolic Society and Catholic churches in Hoogland, Amersfoort and Beesd and choir conductor. He was chairman of the Music Committee of the NKV, (Netherlands Carillon Association). He is carillon- and organ teacher and arranger of music for carillon. He has played numerous organ and carillon recitals in the U.S., Europe, and the island of Curaçao. In 2002 he played nine weeks six concerts a day on the island of Kyushu in Japan in Huis ten Bosch, a Dutch style family park. Kroezen has won prizes at several international carillon contests. Together with the Zwolse Beiaard Stichting, (Zwolle Carillon Foundation), he organized among others two contests for carillon duet and a carillon composition contest, held in Zwolle, the Netherlands.