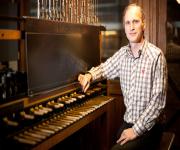 Eddy Mariën received his first lessons in piano and carillon from his stepfather Jef Rottiers. He completed his piano studies at the conservatory of Mechelen, Flanders, Belgium, and studied subsequently at the Royal Carillon School “Jef Denyn”, where he teaches now. At the Lemmens Institute in Leuven he obtained the degree of Master of Music. He gave master classes at the Yale University (USA), at the National Palace of Mafra (Portugal) and at the Carillon School of Denmark.
He is the city carillonneur of Mechelen, Leuven and Halle as well as the carillonneur of Meise, where he was the initiator and advisor of the new carillon. He was invited to give recitals and lectures in Europe, America, New Zealand and Australia. He recorded several CDs such as Romantische Beiaardmuziek, Carillon and Guitar and Beiaardmuziek van Jef Rottiers. At the international carillon competitions of Nijmegen (1989) and Berlin (1991) he won the first prize. Now he is invited regularly as member of the jury in national and international competitions and exams. Being a promoter for combining carillon with other instruments, he was the first to perform with guitar and with vibraphone. He plays quatre-mains in the American-European carillon duo Campana Nova with Thomas Lee. 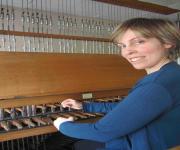 Andrée-Anne Doane was born into a family of professional musicians. She received a Bachelor's degree in voice from University of Quebec in Montreal. Organist in several Montreal churches, her interest in liturgical music brought her to Saint-Joseph's Oratory where she was cantor for several years. There she began her lessons on the carillon, first with Claude Aubin (Montreal) and then with Dr. Andrea McCrady (Peace Tower, Parliament of Ottawa). Since 2008 she holds the post of Carillonist at the Oratory. Besides playing 2 concerts per day, 5 days a week, Mrs. Doane is responsible for promoting the carillon through scheduled tours and workshops. Her summer carillon festival features artists from around the world. In 2010, she recorded solos and duets with Claude Aubin on the Carillon of Saint-Joseph's Oratory, a CD entitled “Chantent les Cloches”. Summer, 2012, Doane performed in the concert series at the University of Toronto and at the Peace Tower in Ottawa. In June 2013, she became a Carillonneur member of the Guild of Carillonneurs in North America after playing a successful exam recital at St. Paul, Minnesota. After giving several recitals in Denver (Colorado) and Chicago (Illinois), she considers it a great privilege to have been invited to Iowa for a recital on the Stanton Memorial Carillon at Iowa State University. 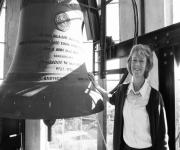 Lynnette Geary is the University Carillonneur and Assistant to the Dean for the College of Arts and Sciences at Baylor University in Waco, Texas. She studied carillon with Dr. Herbert Colvin, and has been a carillonneur member of the Guild of Carillonneurs in North America since 1996. At Baylor, she teaches carillon, and is responsible for providing music for University events including Homecoming when alumni from all over the country visit the campus; Fall and Spring Premiere when prospective students visit the campus; Ring Out ceremony when the senior class passes the charge of leadership to the junior class; recitals in honor of the graduating classes for summer, winter, and fall; formal carillon recitals, and other occasions as the University requires.
Geary served as carillonneur at St. Alban's Episcopal Church in Waco from 1980-88, as Assistant Carillonneur at Baylor University from 1996-2006, and as University Carillonneur since 2006. She has performed recitals in Cohasset, Gloucester, and Norwood, Massachusetts, Springfield, Illinois, Clemson, South Carolina, and in Austin, Houston and San Antonio, Texas.
Geary has an undergraduate degree in instrumental music (band), and a master of music degree in music history and literature, both from Baylor University. She is a singer at Temple Rodef Sholom, a member of the chancel choir at St. Paul's Episcopal Church, plays bass clarinet and serves as section leader for low reeds/low brass in the Waco Community Band 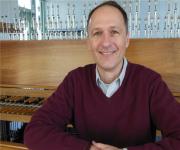 Robin Austin was named full-time carillonneur of the Thomas Rees Memorial Carillon in Springfield, Illinois September 2012 and is just the third individual to hold this position since the carillon's completion in 1962. The Rees Carillon is recognized as one of the world's major carillon centers largely as a result of its International Carillon Festival-celebrating 52 years-founded by Raymond Keldermans and expanded by his son Karel.
Prior to his Springfield appointment, Robin served as Princeton University's carillonneur for 20 years. He began his carillon studies in 1979 with Frank Péchin Law, former carillonneur of the Washington Memorial National Carillon (Valley Forge) and passed his advancement examination recital for the Guild of Carillonneurs in North America (GCNA) in 1981. He continued his studies with Jacques Lannoy at L'Ecole Française de Carillon earning the carillonneur's diploma in 1982. Other carillon mentors have included Ronald Barnes and Frank DellaPenna.
As a fundraising professional and nonprofit executive, Robin has held a variety of leadership positions at Recording for the Blind, Children's Hospital of Philadelphia and most recently served as senior principal gifts officer at the Philadelphia Museum of Art. A native of Pennsylvania, Robin earned a Bachelors of Arts from West Chester University and a Master of Social Service from Bryn Mawr College.