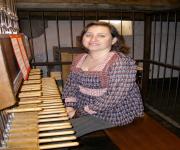 Elizabeth Graves-Vitu Elizabeth Vitu, (b. 1957, Virginia), studied the carillon with Charles Chapman in Luray, Virginia for nine years, during which time she often participated in work sessions at the carillon with Johan Franco and LaSalle Spier. She pursued her carillon studies at Hollins University which created a music degree, option carillon, for Elizabeth. From 1976-1980 she studied with James Leland, Roy Hamlin Johnson, John Diercks and had an internship with Milford Myhre. Upon receiving her diploma with honors, she then studied for two years with Jacques Lannoy at the Ecole Française de Carillon in Douai, France. She was named assistant-carillonneur of the Perpignan Cathedral from 1999-2005 and was named carillonneur by Episcopal decree as of January 1st 2006. Elizabeth is responsible for organising the Perpignan International Carillon Festival, which is in its 10th year. She has edited music and made arrangements of music for publication, in both England and the United States, is an active member of the British Carillon Society, and new member with the Guild of Carillonneurs in North America. She regularly gives concerts throughout Europe and the United States. For the first time in the history of the Perpignan Conservatory of Music, and upon initiative by the cathedral carillonneurs, a carillon class began as of September 2010, with Elizabeth as professor.

Robert B. Grogen, was first appointed to the music staff at the National Shrine of the Immaculate Conception, Washington, D.C., in 1964, becoming Organist in 1976. His academic degrees are from The University of Kansas (bachelor and master of music in organ), Washington Cathedral (fellow of the College of Church Musicians) and Catholic University of America (doctor of musical arts in organ). His carillon study, at the University of Kansas and at Washington Cathedral, was with Ronald Barnes.
Now retired from his full-time position, he remains on the National Shrine staff as Basilica Carillonneur (and as Organist Emeritus). Upon his retirement he was honored with knighthood in the papal order of St. Gregory the Great by His Holiness Benedict XVI for contributions to the art of sacred music. He teaches organ, carillon and related courses at the Benjamin T. Rome School of Music of The Catholic University of America. His compositions for carillon, for organ and for choir have been published by the Guild of Carillonneurs in North America, H. W. Gray (Belwin/Mills), and E. C. Schirmer.
A carillonneur member of the Guild of Carillonneurs in North America since 1964, he has played carillon recitals across the U.S., in Canada, the Netherlands and France. He is a recipient of the Berkeley Medal from the University of California at Berkeley for distinguished service to the carillon. He has been featured in a series of recordings (in LP, cassette and CD formats) made on the keyboard instruments of the Basilica of the National Shrine of the Immaculate Conception. 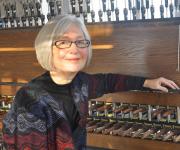 Sue Bergren is an Assistant Carillonneur at the Millennium Carillon in Naperville, IL. She studied carillon with Wylie Crawford and Karel Keldermans, and became a Carillonneur member of the Guild of Carillonneurs in North America (GCNA) in 2004. She currently serves the guild as co-editor for Carillon News the GCNA's newsletter, was recently elected to the organization's Board of Directors, and is music editor and owner of American Carillon Music Editions (ACME), a publishing company of carillon music. She has a Master's degree in Organ Performance from Northern Illinois University and is on staff at Our Saviour's Lutheran Church in Naperville. She is active as a carillon recitalist, plays regularly on the Naperville Millennium Carillon and gives weekly recitals on the Rockefeller Memorial Carillon. 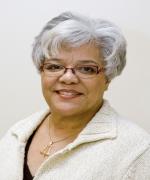 Julianne Vanden Wyngaard, a native of Grand Rapids Michigan, began her musical study at age 4 and continued in piano at the Eastman School of Music in Rochester, New York, the University of Wisconsin-Milwaukee and Michigan State University. She was a noted concert pianist when she joined the faculty at Grand Valley State University in 1967 where her work included piano studio teaching and management of the Arts at Noon Series. She served the department as Chair for twelve years and completed her full-time work at GVSU as Associate Dean in the College of Liberal Arts and Sciences in 2005.
Vanden Wyngaard began her carillon study in 1994 and was accepted as a student at the Netherlands Carillon School in Amersfoort where she studied with Todd Fair and Bernard Winsemius. In 1999 she qualified as a Carillonneur member of The Guild of Carillonneurs in North America and received the First Diploma in 2000 from the NCS in Amersfoort. Since that time, she has been the principal performer on the two carillons at Grand Valley State University where she also presents a summer concert series on each campus featuring guest carillonneurs from around the world.