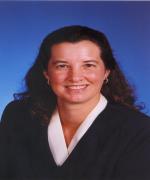 Laura Ellis serves the University of Florida as associate professor in the School of Music. Dr. Ellis teaches undergraduate and graduate organ, harpsichord, and carillon. In addition to her duties as university organist, Ellis serves as curator for the Andrew Anderson Memorial Pipe Organ in the University Auditorium, the Carillon in the Century Tower, and the historic keyboard instruments housed in the School of Music.
A native of Minnesota, Ellis is a magna cum laude graduate of Luther College (Decorah, Iowa) and holds a Master of Music degree in church music and a Doctor of Musical Arts degree in organ performance from the University of Kansas. Her major organ teachers have been William Kuhlman and James Higdon. While in residence at the University of Kansas, she studied carillon with Albert Gerken.
Prior to her Florida appointment, Ellis served as professor of music at McMurry University and held the position of parish organist at the Episcopal Church of the Heavenly Rest in Abilene, TX. Ellis began her teaching career at the University of the Ozarks in Clarksville, Arkansas.
In October 2007 Ellis traveled to Australia for a series of five recitals, including a solo organ recital on the Great Hall Organ at the University of Sydney. She also performed solo carillon recitals at the University of Sydney and at the National Carillon in the capital city of Canberra. Earlier this month, Ellis performed as guest artist at the 47th International Carillon Festival held in Springfield, Illinois. In July, she will perform solo recitals on both organ and carillon at The Cathedral of Saint John the Evangelist in Spokane, Washington.
In addition to her regular performances on the carillon in Century Tower on the University of Florida campus, Ellis has performed solo carillon recitals at House of Hope Presbyterian Church, St. Paul, MN, Mayo Clinic, Rochester, MN, the University of Chicago, the Millennium Carillon (Naperville, IL), the Chicago Botanic Gardens, the University of Toronto, and the Metropolitan Church, Toronto. Recital engagements as organist have included appearances with the Jacksonville (FL) Symphony, Piccolo Spoleto (Charleston, SC), Westminster Abbey, and various locations throughout Florida, Texas, and the South.
Ellis is active in the Guild of Carillonneurs of North America (GCNA) and holds the position of director of the Music and Publications Committee. In addition, she currently serves the American Guild of Organists as District Convener for the state of Florida and Dean of the Gainesville (FL) chapter.
More information about the carillon at the University of Florida may be found at www.arts.ufl.edu/carillon. Ellis may be contacted at: LREllis@ufl.edu 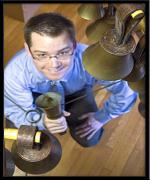 Joseph D. Daniel , a native of Corpus Christi, Texas, is the Music Associate & Carillonneur at Christ Church Cranbrook (Episcopal), Bloomfield Hills, Michigan. A recipient of the Bachelor of Music degree from Baylor University, Waco, Texas, as a student of Dr. Joyce Jones and Dr. O. Herbert Colvin, he completed his Doctor of Musical Arts degree in Organ Performance at the University of Michigan, Ann Arbor, MI, as the final pupil of Prof. Robert Glasgow. Before beginning his doctoral work, Dr. Daniel earned dual masters degrees in organ and carillon performance from the same institution.
Dr. Daniel made his European professional debut in 2001, at age 20, with three carillon concerts in France and Germany. He has played throughout the Mid-western United States, the East Coast, and Texas. This past June, he presented a lecture at the Guild of Carillonneurs in North America Annual Congress at the UC, Berkeley, entitled The Rise of the American Handbell Culture.
Dr. Daniel has regularly taught and performed at numerous summer courses sponsored by the American Guild of Organists and the American Guild of English Handbell Ringers. He is active in a variety of professional organizations including the Detroit chapter of the American Guild of Organists, the Association of Anglican Musicians, the Guild of Carillonneurs in North America, and the American Guild of English Handbell Ringers.
In addition to his duties at Cranbrook, Dr. Daniel is regularly invited to perform recitals in the Detroit Metropolitan Area. He has played on numerous concerts throughout his native Texas, and is quickly making a name for himself having played engagements in California, Ohio and appeared at the famed Piccolo Spoleto Festival in Charleston, SC. 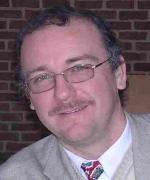 Marc van Eyck is the carillonneur at the Sint-Geertruitoren in Leuven, Belgium. Van Eyck's interest in the carillon began in 1968 when he studied at the Scheppersinstitute in Mechelen, where the Sint-Rombouts carillon tower is located in front of the institute. After he received his masters degree at the Hogeschool-Universiteit-Brussel in 1984, he studied at the Royal Carillon School Jef Denyn in Mechelen and received his diploma in 2001. Van Eyck is the author and founding father of the Quality Carillon Standard and inventor of the vertical transmission system for carillon. 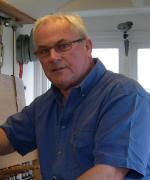 Trevor Workman was appointed Carillonneur by Bournville Village Trust upon the retirement of Clifford Ball who had occupied the position since 1924 having gained a worldwide reputation as master of the Carillon. Clifford Ball was the first student outside Belgium to gain a Diploma from the Royal Carillon School in Mechelen, Belgium, having received tuition from the pioneering Carillonneur Jef Denyn. As an accomplished pianist Trevor went on to receive Carillon tuition from Clifford Ball before taking over the position in Bournville in 1965. Trevor is now the longest serving Carillonneur in Bournville and is recognised as Carillonneur on the world stage having represented Great Britain in numerous European and World Carillon events.
Trevor has previously played extensively in the USA having been guest recitalist in the International Carillon Festival at Bok Tower Gardens, Lake Wales, Florida and given recitals in numerous States including Illinois, Connecticut, New Jersey, Washington DC, Pennsylvania, Vermont etc. Trevor has played the Naperville Millennium Carillon on 2 previous occasions in 2000 and 2001. Unfortunately a third occasion failed to materialise in 2006 when the Carillon was out of action during construction work. Trevor Workman has also completed extensive recital tours of Europe and regularly plays in Holland, Belgium and France. He also participated in 2005 in a series of Inaugural Concerts in celebration of the new Carillon in Alverca, Portugal.
Trevor Workman is currently President of the British Carillon Society and is active in promoting the carillon and the carillon art in England. His major priority at present having celebrated the Bournville Carillon Centenary in 2006 is in developing the “George Cadbury Carillon School”, the first of its kind in the United Kingdom, which was inaugurated in October 2006 by Sir Adrian Cadbury. This venture is being developed in conjunction with the “Royal Carillon School 'Jef Denyn' Mechelen”, and the “Netherlands Carillon Institute Dordrecht” and with professional music establishments in the UK.