WEDNESDAY, May 23 at 7:00 PM
Lyle Anderson, University of Wisconsin, Madison

WEDNESDAY, May 23 at 7:00 PM
Lyle Anderson, University of Wisconsin, Madison 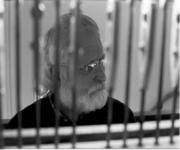 Lyle Anderson , a native of North Central Wisconsin, began carillon study on the University of Wisconsin Memorial Carillon in the mid-1960's with Professor John Wright Harvey. Following a year's study with the late Leen 't Hart at the Netherlands Carillon School in Amersfoort, Anderson earned a "Final Diploma" in carillon in June 1980. Returning to Madison, he was appointed University Carillonneur in August 1986. Anderson has a degree in Music History from UW-Madison and is organist at First Church of Christ, Scientist, and Plymouth Congregational United Church of Christ, both in Madison. He also manages the office of the Wisconsin State Climatologist and is on the staff of Public Radio's Michael Feldman's Whad 'Ya Know? 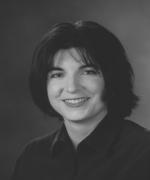 Elizabeth Egbert Berghout has been University Carillonneur at the University of Kansas since 2000. She holds the Bachelor of Music degree in organ performance and pedagogy from Brigham Young University (1994), the Master of Music degree in church music from the University of Kansas (1997), and the Doctor of Musical Arts degree in organ performance also from the University of Kansas (2000). Her major teachers include Albert Gerken (carillon), Michael Bauer, Parley Belnap, and James Higdon (organ) and Yvonne Egbert, Douglas Humpherys and Paul Pollei (piano). Dr. Berghout, a carillonneur member of the Guild of Carillonneurs in North America, performs weekly recitals and teaches on the historic World War II Memorial Carillon overlooking the University's Lawrence campus. Recent international performances include the 2000 World Carillon Congress and the House of Parliaments in Ottawa, Ontario. In a dual career as a concert organist, Dr. Berghout performs frequently on the Wolff organ in the Bales organ Recital Hall at the University of Kansas. She is also featured regularly as a guest organist at the Mormon Tabernacle in Salt Lake City, Utah, where she has performed on the daily recital series since 1995. An advocate of new music, Dr. Berghout has commissioned and premiered several works for organ, including: The Kraken for Pedals Alone and Tam Tam
(2000) by Charles Hoag and "Come Follow Me" Variations (2000) by Bruce Polay. Dr. Berghout is married to fellow organist and organ historian Daniel Berghout. They are the parents of two daughters, Frances and Laura. 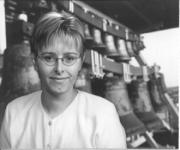 Ann-Kirstine Christiansen, born 1965, graduated as cantor (choirmaster) and church organist in 1990 from the Danish music-conservatorium: "Det Fynske Musikkonservatorium" at Odense. Since 1991, she was the organist and choirmaster at Brabrand and Sønder AArslev Churches. From January 1991 to November 1995, she studied at The Scandinavian Carillon School in Løgumkloster which completed with a diploma and the title of Maître Carillonneur. From January 1996, she is employed as a teacher at The Scandinavian Carillon School. After two years of further studying with Maître Carillonneur Peter Langberg, she debuted on the carillon of Vejle Sct. Nicolai Church in October 1997. She is the first carillonneur who has debuted as a soloist on bells in Scandinavia. From January 1998, she was appointed Head of the Department of The Scandinavian Carillon School, and with this position she became the concert-administrator of two city hall carillons in Denmark - Copenhagen(Frederiksberg) and Århus. In summer 1999, she was elected as president for NSCK (Nordic Society of Campanology and Carillon), Executive Member of WCF in summer 2000. She has played concerts in Europe, U.S.A. and Canada. A CD with Søren Gleerup Hansen on organ and Ann-Kirstine Christiansen on bells (with the Norwegian Travelling Carillon recorded in Norwegen) has appeared in Denmark in Marts 2001. 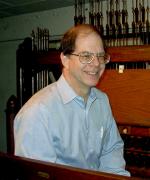 Wylie Crawford is the University Carillonneur at the University of Chicago, a position he has held since 1984. In addition, he is the Resident Carillonneur for the Chicago Botanic Garden (since 1986), the Carillonneur for Seabury-Western Theological Seminary in Evanston, and was recently appointed City Carillonneur for the new Millennium Carillon in Naperville. Mr. Crawford fulfilled the requirements of the Guild of Carillonneurs in North America to become a Carillonneur member in 1977. During his twenty-five year association with the Guild, he has served on numerous committees, most notably as the Chair of its Membership Committee and as sponsor of the GCNA World Wide Web server (http://www.gcna.org). He is currently a member of the GCNA's Board of Directors. He also heads the GCNA's delegation to the World Carillon Federation. This organization, which is a federation of international associations, organizes biannual conferences in countries with a carillon culture. Mr. Crawford serves on its Board of Directors and has been its Treasurer since 1990. A Chicago native and an Evanston resident, he is the father of twin daughters.