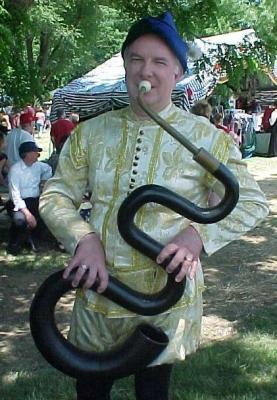 "But the true bass of the cornett is performed with the serpent, so that one can say that one without the other is a body without a soul."
-Mersenne, 1636

"It seems that the irregular distance of the holes of the Serpent makes its diapason more difficult than that of the other instruments."
-Mersenne, 1636

"Suitably about the serpent and its players,
The urge to perform is not a sign of talent. "
-Garrison Keillor

This composer stated that the serpent sounds like
"a donkey with emotional problems."
-David Raskin

The serpent was probably invented in 1590 by Edme Guillaume, a canon at Auxerre. It was used in sacred music to reinforce low men's voices. When well played, it blends with voices and gives a depth to the choral sound. During the next two hundred years after its invention, it was used as a military band instrument and later evolved into the ophecleide and tuba.

The serpent has six finger holes arranged in two sets of three with a fundamental note of C. Note that without a hole for the thumb, the b and the c at the top of the each octave are both fingered the same, with the difference in pitch being made by lip adjustment. As with the cornett and lizard , it takes great skill and practice to get a good sound since every note depends on the player's correct embouchure and pitch accuracy. Only the fundamental has much clarity of sound. Chromatics are obtained by half-opening the finger holes or by fork fingering. The conical tube of the serpent is over six feet in length. Its construction is similar to that of the smaller cornetts and it has an elbow shaped crook to bring the mouthpiece to the player's lips. The wood body (often walnut) is sometimes made from several fairly short pieces joined together and covered with leather; other times, glued up from two complete halves of hollowed out blocks of wood. Like the lizard, the serpentine shape of the instrument brings the finger holes and mouthpiece within reach of the player. Its range can extend to three octaves. 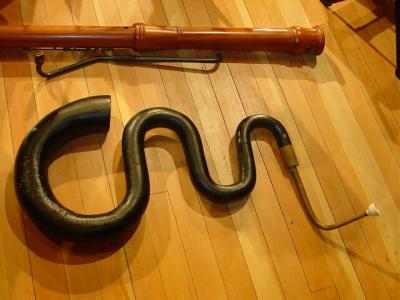 "The essentially barbaric timbre of this instrument would have been far more appropriate to the ceremonies of the bloody cult of the Druids than to those of the Catholic religion. There is only one exception to be made - the case where the Serpent is employed in the Masses for the Dead, to reinforce the terrible plainsong of the Dies Irae. Then, no doubt, its cold and abominable howling is in place."
-Hector Berlioz (1803-1869)

"Mrs. Fennel, seeing the steam begin to generate on the countenances of her guests, crossed over (to the band) and touched the fiddler's elbow and put her hand on the Serpent's mouth."
-Thomas Hardy (1840-1928)

Musica Antiqua's collection includes a replica by Monk. The crook is brass; the mouthpiece is ivory. 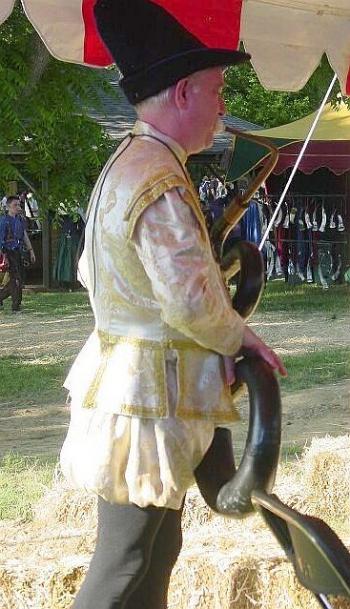 "Wood dry and full of rot, leather cracking, and often equipped with a mouthpiece for some other instrument, serpents were hung on walls to collect dust, only to be taken down by well- (or ill-) meaning `experts' who would blast a few notes and pronounce the serpent `unplayable' and a detestable thing."
-Douglas Yeo

"And when, as time passed, the serpent and the ophicleide helped out the bass of the harmony, the cup of misery must have been full to overflowing."
-The Musical Companion, edited by A.L. Bacharach, 1946