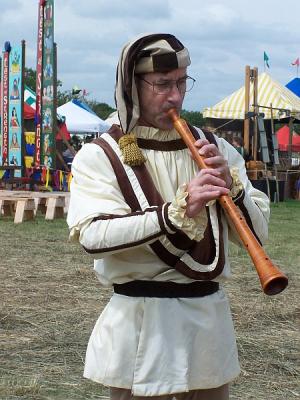 The shawm was the most important double reed instrument of the Middle Ages and Renaissance. The shrill piercing tone of the medieval shawm made it suitable for use outdoors. It is still found in Asian and European folk cultures today.

The shawm was probably a Mohammedan invention and supposedly developed in Bagdad during the reign of Calif Harun-al-Rashid (763-807). It seems logical that the shawn was introduced into Europe during the time of the Crusades when the typical Saracen military band consisted of shawms, trumpets, and drums.

The medieval or oriental shawm is keyless with seven finger holes and one thumb hole. The narrow bore accounts for its compact tone which is produced by a double reed which is not controlled by the player's lips (i.e., the entire reed is placed inside the mouth). This reed is attached to a staple at whose base lies a metal disc, against which the player presses his lips when performing. 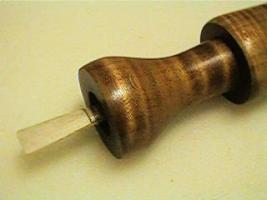 Musica Antiqua's shawms include a maple sopranino in f1 and a soprano in c1 by Gunther Koerber.