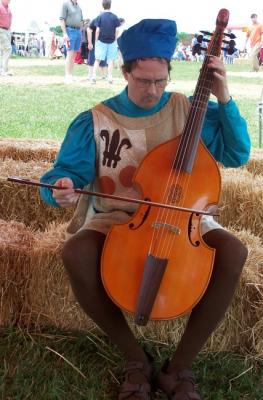 -Thomas Middleton,
a Trick to Catch the Old One

The viol family may have originated by applying a bow to a pre-existing plucked string instrument. It may have developed in Spain during the late fifteenth century (the tenor viol has the shape, size, and tuning of the Spanish vihuela). Only about the year 1600 did its outward appearance become standardized. Of the common sizes of the gamba family, the bass was the largest, and the treble viol was the smallest. 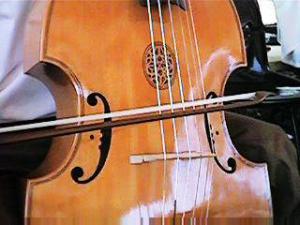 The most common viol has six strings and is tuned in the interval of fourths with a third in the middle. It has a long tail, fretted finger board (like the modern guitar), a flat back, sloping shoulders, and deep sides with reinforcing crossbars inside. A carved head often adorns the top of the instrument. The viol has the shape of a dismembered female body, and when held between the legs in playing position, as in the case of the bass viol, a type of play may be imagined that is not strictly musical.

All viols are played while seated, with the instrument held on or between the knees. (There is no support, or peg, on which to rest the instrument as is the case with the modern cello.) The viol bow is held in an underhanded position with the finger controlling the tension of the horse hair. 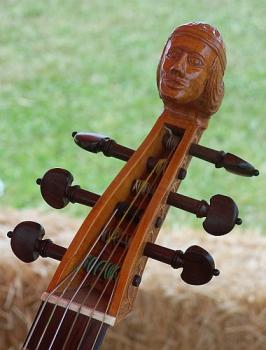 The viol, as the lute, was cultivated among courtly society by gentlemen amateurs. Although usually associated with serious music, it often was mentioned in comic situations, where it connoted an affected ass. Sir Andrew Agnecheek plays o' the viol de gamboys (Shakespeare, Twelfth Night) and Onesiphorus Roard's description of his niece's attributes is quoted above.

A consort of viols was the ideal medium for polyphonic music. Its sound was sustained and clear with little vibrato. Viols were ideal for accompanying solo voices in consort songs.

Musica Antiqua's collection includes a bass by Linda Shortridge, a bass by Hart, a bass by Kelishek, and a tenor by Glan y Gors. The bow pictured is by Seifert. 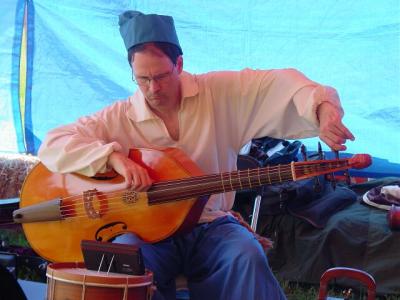