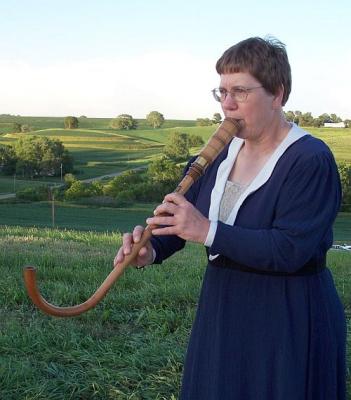 Beginning with the fifteenth century a new type of double reed instrument was developed. The player's lips did not touch the reed because the reed was enclosed inside a protective cap with a slot at one end. Strongly blowing through this slot causes the reed to vibrate as it does in the bagpipe chanter. The name of the Crumhorn comes from the German krumhorn (also krummhorn, krumhorn), meaning curved horn (or the older English crump, meaning curve, surviving in modern English in crumpled and crumpet, a curved cake).

The name first occurs in 1489 as an organ stop.The crumhorn, used in the 14th to17th centuries in Europe, is wooden, with a cylindrical bore. The crumhorn is the earliest and most common instrument of the reed cap family which also includes the kortholt, cornamuse, and hirtenschalmei. The crumhorn is thought to have developed from the earlier bladder pipe.

The cylindrical bore (as opposed to a conical bore) and the reed closing the end of the resonating tube mean that the crumhorn overblows a twelfth rather than an octave, giving the instrument a fingering system similar to the lower register of the clarinet. However, the lack of direct control of the reed of a windcapped instrument renders these higher notes extremely difficult to access. Thus the normal range is limited to the simple fundamental sounds produced by successive opening of the holes giving a range of an octave and one note. Many larger surviving instruments have auxiliary holes that extend the range downwards to just over an octave. On modern reconstructions additional keys are provided to extend the range upwards by one to three notes. And there is some evidence to suggest that crumhorns were sometimes played without the windcap, possibly to facilitate the production of higher notes. 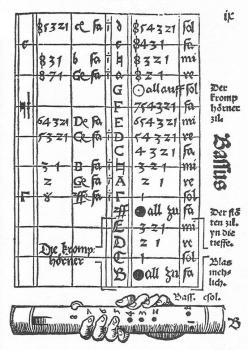 Crumhorns have a characteristically sharp attack which is very effective in an ensemble. Depending on how their reeds are voiced, they range in tone from a gentle, somewhat nasal humming of a bumble-bee to a rich, resonant buzzing.

The crumhorn was turned out of a length of wood, which was then bored out, filled with sand, plugged, and the lower end steamed (to soften it) and finally bent into a half circle. The curve is decorative only, having nothing to do with the sound. The curved bell section of many surviving instrument is hollowed out to form a more or less conical foot, which has the effect of raising the volume.

The reed comprises a thin strip of cane, folded over and bound to the staple (a short tube) inserted into the top of the wooden pipe. When the reed is blown through, it vibrates, causing a standing wave to develop in the bore of the crumhorn. Pitch is governed not only by the length of the pipe down to the open finger holes, but also by breath pressure, so that the crumhorns are played at a fixed dynamic level. Variations in pitch from changes in breathing are like the change in pitch of a bagpipe chanter as the player starts to fill the bag. Blow too hard and the reed closes (no sound). Blowing too softly allows the pitch to flatten or sag to unusable levels.

Note that larger crumhorns have a pipe or airway on the side of the cap (similar to the large recorders) which is blown into to allow reaching the finger holes on these longer instruments. 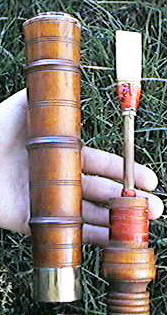 Despite its strange shape and the amusing reaction of listeners when the instrument is played poorly, the crumhorn played a serious role in all kinds of renaissance music ranging from dances and madrigals to church music. As early as 1500 crumhorns were used along with other instruments to accompany two masses performed for the wedding of Duke Johann to Sophia of Mecklenburg. King Henry the Eighth of England owned 25 crumhorns, so they may have been played at his court. However, they were not as popular in Great Britain as on the Continent, especially Germany, Italy and the Low Countries, from where a small repertoire of music specifically for crumhorns has been preserved. 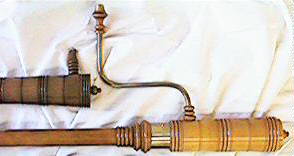 Three Country Dances in One
(ground bass by bass crumhorn)

(some sources courtesy of Nicholas Lander of Crumhorn Home Page) 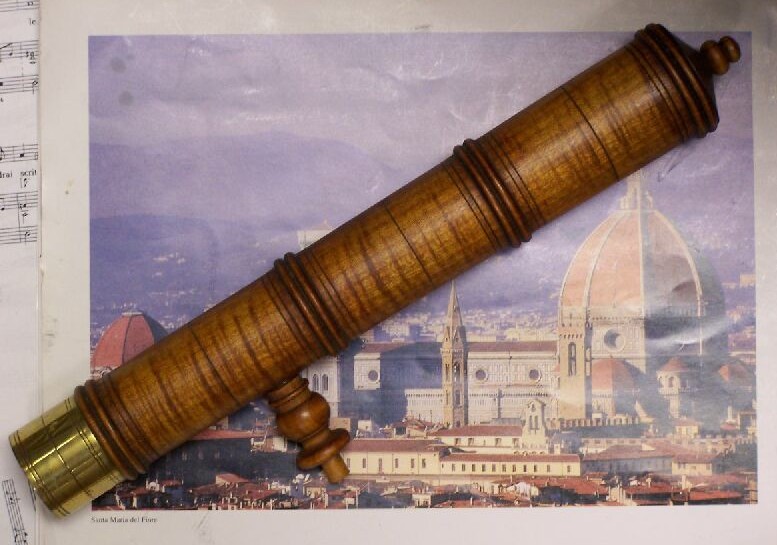