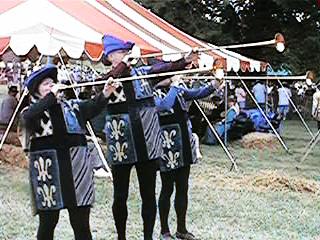 Iowa State University owns 16 straight valve-less trumpets which are, perhaps, modeled after the long trumpets blown by angels pictured in Michelangelo's 1536-1541 The Last Judgement behind the altar on the west wall of the Sistine Chapel.

These instruments, made by Conn, were purchased in sets of four per case from four different institutions in the 1930's for use with the Iowa State College Marching Band. They are said to be the entire set of coachhorns made by the Conn factory. The row of red-uniformed men playing fanfares while leading the marching band was an impressive image remembered by the alumni of the era.

Musica Antiqua uses one set of coachhorns (playing three and retaining one for a spare) for announcing important events at Renaissance Fairs and for introducing each delicacy of the Madrigal Dinner. Persons seated at the head table even have been known to call for a fanfare to introduce a favorite guest or dancer.

The coachhorns are pitched in B flat, and except for two which have been modified with a sliding leadpipe for tuning purposes, are still in their original condition. The bell sections are formed of red brass, and surprisingly, the leadpipes accept cornet rather than trumpet mouthpieces.