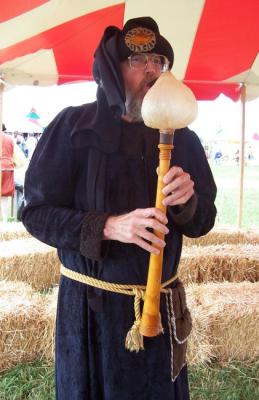 The bladder pipe is a very distinctive loud instrument which has a reed which is enclosed by an animal bladder. The performer blows into the bladder through its mouthpiece, a wooden pipe. Like the bag of a bagpipe, the bladder serves as a wind reservoir keeping the lips from touching the reed directly. The bladder pipe's sound is unusual because the player is unable to tongue or otherwise control the reed. This medieval instrument was one of the principal early wind cap instruments and is considered the forerunner to the crumhorn. Since it cannot overblow for an upper register, the fingering is even similar to the crumhorn. 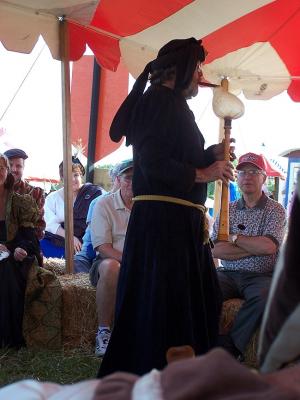 Early images of bladder pipes sometimes show the instrument with a second pipe parallel to the first, apparently serving as a drone. The instrument existed before medieval times with Aristophanes in Lysistrata mentioning a wind instrument called a physalis (a word derived from bladder). It is mentioned in medieval literature and is shown in art from the time. Two bladder pipes, for example, are among the instruments illustrating Cantigas de Santa Maria, a collection of sacred songs written for the court of Alfonso el Sabio (reigned from 1252-1284). By the sixteenth century, the bladder pipe had become an instrument associated with beggars and peasants.

Musica Antiqua's bladder pipe has a bladder from a sheep. It looks like parchment and crackles as it is filled. Replacement cost for the bladder is currently $50. 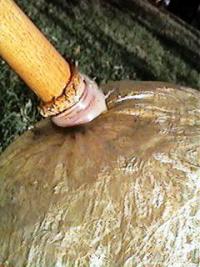