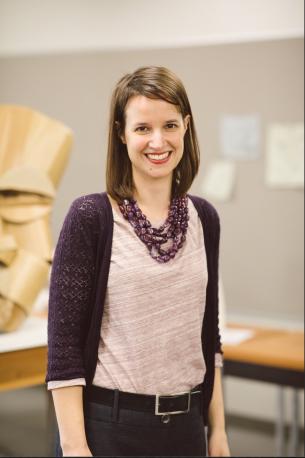 Amanda Petefish-Schrag, associate professor of theatre, is the 2022 recipient of the Cassling Innovation Award. Petefish-Schrag, who has been a faculty member in the Department of Music and Theatre since 2014, was recognized for her successful creative interdisciplinary ventures which blend theatre, puppetry and music to create transformative experiences for students and audiences.

The award was established by Dr. Randal S. Cassling and Lori S. Cassling to facilitate new directions in faculty research, especially as they relate to interdisciplinary research and scholarship.

Petefish-Schrag’s research and creative work explores the use of discarded materials as a means of preserving puppeteers’ historical social-ethical function. Interdisciplinary collaboration is at the heart of Petefish-Schrag’s work. Her most recent project was ISU Theatre’s “Iowa Insect Pageant”, a collaboration with the ISU Jazz Band and ISU Department of Entomology presented in the spring of 2022.

Petefish-Schrag’s professional credits include work as a playwright, puppeteer, director, and actor. Her playwriting work has been produced at festivals and theaters in London, Chicago, New York, Los Angeles, Kansas City, Denver, Minneapolis, Milwaukee, and Iowa City, and has been published by Playscripts, Inc., and Smith and Kraus. She is a member of the Dramatists Guild, the International Union of Marionette Artists, and the Puppeteers of America. She is the past recipient of the Kennedy Center National Teaching Artist Grant and the Missouri Governor’s Award for Excellence in Higher Education. She has received multiple Distinguished Achievement Awards from the Kennedy Center American College Theatre Festival (KCACTF), and her work was selected as an invited production at KCACTF Region 5 for three consecutive years.